My favorite coffee mug reads, “God grant me patience … and I want it right now!”

We live in an age of Now. The food can never be fast enough, or the traffic, or the wi-fi. As the speed limit increases, so do we increase our speed. And it’s not enough to do one thing anymore—oh, no—we have to multitask—even though we know this is less effective than doing one thing at a time with patience. Love Jesus? Honk. Want to meet Jesus? Text while driving!

Yet no amount of speed in our lives can speed up justice. Justice is one of those things that comes only when it comes. Even in the limited sense of court justice, if we’re doing it right, it can take a long time, much longer than we want it to. We just have to have faith that justice will eventually come. This is also true of Justice in the bigger sense. In my Ethics class I learned the standard Roman Catholic definition of justice, which became a class mantra as we studied: Justice means that everybody has at least enough resources to participate meaningfully in society. So, then, food, shelter, and even the ability to vote are components of justice. Martin Luther King, Jr. said, “The arc of the moral universe is long, but it bends toward justice.”

Of course, notions of justice in human society can’t begin to account for situations in which we feel that God has been unjust. Divine justice is another matter. Ask Job how just it was that he lost all his family and all his property to seemingly “natural” disasters. There are plenty of situations in our lives that feel unjust despite the fact that no human institution can fix them.

The widow in Jesus’ parable today, though, seems to have believed that a certain judge could help fix her situation. So she waited for justice. But she didn’t wait passively … she waited actively, doing everything in her power to speed justice along, and never giving up.

Jesus was great at knocking people out of their comfort zone. Those of us who are most familiar with scripture can get too used to it: we forget how odd some of Jesus’ parables really are. The people who were upset at Jesus’ stories often had good reason to be! In today’s parable, Jesus likens God the Father to a no-good, lousy, scoundrel of a judge. Author Robert Farrar Capon comments, “Never having been to a theological seminary, [Jesus] was blessedly free of the professional theologian’s fear of using bad people as an illustration of the goodness of God.” 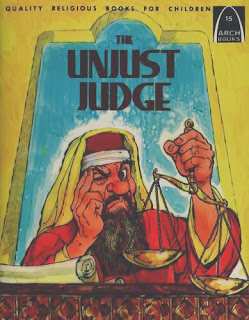 I still have the storybook of this parable that I had as a child, and now it belongs to my daughter. Like many children’s Bible stories, it elaborated on this all-too-brief story a great deal, the goal being to pad a mere eight verses into a thirty-two-page, illustrated, rhyming paperback. In this version of The Unjust Judge, the widow, whose name is Dinah, owns a valuable field. But because she is an easily exploited widow, her neighbor shows up with his sons and takes it from her. There is nothing she can do to stop them. So she goes to the judge to plead her case. Clearly she is an innocent victim.

Meanwhile the judge, whose name is Asher, is portrayed as boorish, lazy, and disrespectful of the weak and vulnerable. To him, this widow is nothing but an annoyance. Well, Jesus says as much in the actual story about the judge: he “neither feared God nor had respect for people.” Even the judge knows it: “I have no fear of God and no respect for anyone.” Clearly we are not to trust this man’s ability to judge. So page after page goes by in which the widow goes to court and cries, “Justice! Justice!” Then she goes home and prays. She accosts the judge on his lunch break and shouts, “Justice! Justice!” And she goes home and prays. Finally, she stands outside the judge’s bedroom window in the middle of the night hollering at the top of her lungs, “Justice! Justice!” And the judge, exhausted and fed up, screams, “All right already!” And she gets her field back. The poor widow has won back her property through her unflagging determination and chutzpah, and her winning smile tells us that you can always beat the bad guy if you just hang in there long enough and never sink to his level.

This is a fine expansion of a tiny parable, but hold on a minute. Where does the story—and I mean the story as it has been handed down to us in the Bible—where does the story say the widow was in the right? Look at the story for a minute: we never find out a single detail about the court case. The widow keeps asking for “justice,” but what’s her definition of justice? For all we know, she may be the guilty party in this undefined lawsuit. Let’s admit that we’ve all known people who insisted all their lives that they were being wronged, while we silently muttered to ourselves, “Well, maybe things would go better for you if you weren’t the way you are …”

But the judge is too lazy to do the work of actually finding out what the deal is. And Jesus, by not saying one specific word about her case, shows us that he doesn’t care about that either. We want the widow to be in the right, because we have been conditioned to believe that the poor are always the victims. But we just don’t know. We only know that she is a widow, which means that the societal deck is stacked against her. She has no hope of winning the lawsuit, whether she deserves it or not.
And I think that’s the entire point. Jesus is quick to compare God to the unjust judge, the judge who doesn’t even bother to find out whether the woman has a viable case. Why? Is God lazy, too? Well, no—presumably God knows how innocent or guilty every one of us is, whether we’re fictional widows or real ones, noble heroes or sorry losers. But none of that matters, because God has forgiven us. God showers grace on us whether we deserve it or not! If God had passed the Bar, God might know better. If God were a just judge, we would get what we deserve. And we all know what a disaster that would be.

So the Good News is that, by human reckoning anyway, God is a terrible judge! And this just underscores Luke’s explanation of this parable, that it is about our need “to pray always and not to lose heart.” God’s love enfolds the deserving and the undeserving, the powerful and the weak, the saints and the sinners, the judges and the widows. This is reason enough not to lose heart, and our gratitude at this revelation is reason enough to pray always. God knows our troubles. God hears us cry out day and night for justice, for peace, for mere relief from whatever is assailing us.

But how soon will our help come? How long, O Lord? When pain and suffering are constant companions, what good does it do us to hear, “Just keep praying?” Or to hear, “Any time now, help will come?” The implication can all too easily become, “If only you were praying harder! Kick it up a notch,” or, “If only you were praying the right way, help would come.” God is not a vending machine into which we can drop prayer quarters. God knows what’s best for us, even when we’re hurting. And although we want help now, Jesus insists that God will not delay long.

That doesn’t feel good enough, does it? When you’re waiting in the emergency room for the pain meds to come, being told to wait longer is not good enough. Why doesn’t God just make it happen? And so we try to be patient, we try to endure, and we suffer—in life there is, indeed, much suffering. Our patience flags, and we begin to lose faith. It is no wonder that Jesus asks, “When the Son of Man comes, will he find faith on earth?”

Yet at the time Jesus tells the story, the Son of Man has come, and he is right here among us. Has he found faith on earth? Well, he has found a ragtag group of disciples, and he will trust them to carry on after his death. Maybe that’s the “soon” Jesus refers to—his own impending death, the door through which he and all of us must go. Jesus knew his time was coming, and he wondered aloud, “Is it enough? Will this tiny group understand what I have done here, what I am going to do? Are they faithful enough to see the miracle that will soon save them and everybody and bring justice to the earth?”

To be fair to the disciples, that miracle was very hard to see. It didn’t come all at once to the earth like they were expecting, in a blaze of glory and trumpets and war horses and chariots. It didn’t come in thunder and lightning and wind and fire. It sneaked in through the back door. It was barely perceptible—easy to deny, even. Those who were closest to Jesus saw it first and understood it best. Others needed convincing. And then it began to spread, like a match to newspaper and newspaper to kindling. Before long it was touching hundreds and thousands at once. And still it spreads, the fire of the Holy Spirit, and the arc of the moral universe is still bending toward justice. And the Holy Spirit cannot be contained by any guardians of purity or gatekeepers of religion. No fence can be placed around it. It cannot be seized from the poor like a field, for it belongs to the poor and will never be taken from them. Justice is coming, it hums, and justice is here. Open your eyes to it. The earth and the heavens are yours, even in suffering, even in pain. God’s gifts are all around, and Jesus is alive, even to this day, and the Spirit cannot be tamed.

Yet at the same time, we wait. When justice is delayed, we work and we wait, like that poor widow. Thanks be to God that God is an unjust judge, and that Jesus shows us his face. May God grant us patience, if not right now, then very, very soon. And God, who calls all times soon, will meet us in our pain and will bear us ever onward toward justice. Amen.
Posted by Josh Hosler at 3:40 AM No comments: